KZ-115
DS-55
KZ/LP-115 Tonal Summary:
The KZ/LP-115 combines fixtures that limit the wire traverse with a lobeless cam. This combination limits the coil wire travel much shorter than the .25” of a PAF bobbin. A lobeless cam has the important distinction of not compensating the traverse when it changes direction making for a less uniform coil with more scatter. Additionally the much shorter traverse travel creates what we have dubbed a “center focused” coil. Although the turn per layer gearing is optimal for 42awg wire, (virtually the same as Leesona 102 TPL), this center focused coil is a much fatter coil for fewer turns of wire compared to the Leesona 102 PAF coils.  Combined with it’s long start lead, KZ/LP-115 coils have added scatter giving these PAF coils some of the low end warmth of a hand scattered pickup coil. The fatter coils also mean a 7.9k PAF pickup entirely fills the bobbins creating a wider magnetic aperture for this resistance. The lack of an autostop counter means that PAF’s wound on this machine would have a potential for higher coil offsets. 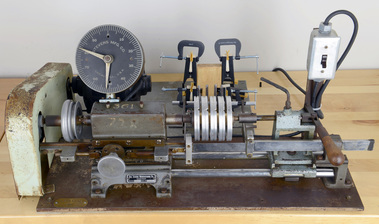 ThroBak KZ/LP-115 pickup winder resued by Les Paul from Gibson Kalamazoo factory.
KZ/LP-115 History: Les Paul’s Pickup Winding Machine
The KZ/LP-115’s history at Gibson begins in 1950 when it first entered Kalamazoo and ends when it was rescued from the Kalamazoo factory by none other than Les Paul himself as Gibson was making the move to Nashville. After sitting unused for decades, the original machine and fixtures were purchased by ThroBak at the Guernsey’s auction of Les Paul memorabilia in February 2015.
Made by Geo-Stevens, the original sales records still exist for this machine showing it was ordered by Kalamazoo based industrial supply house Allen Electric & Equipment in February 1950. Date codes on the electric motor also indicate it was replaced in 1956. Gibson photographs from the 1950’s show that at least two similar KZ/LP-115 machines were used to wind pickups in Kalamazoo. The soft aluminum fixtures of the KZ/LP-115 still show wear marks from both P-90 and PAF bobbins, confirming its use as both a PAF and P90 pickup winder.